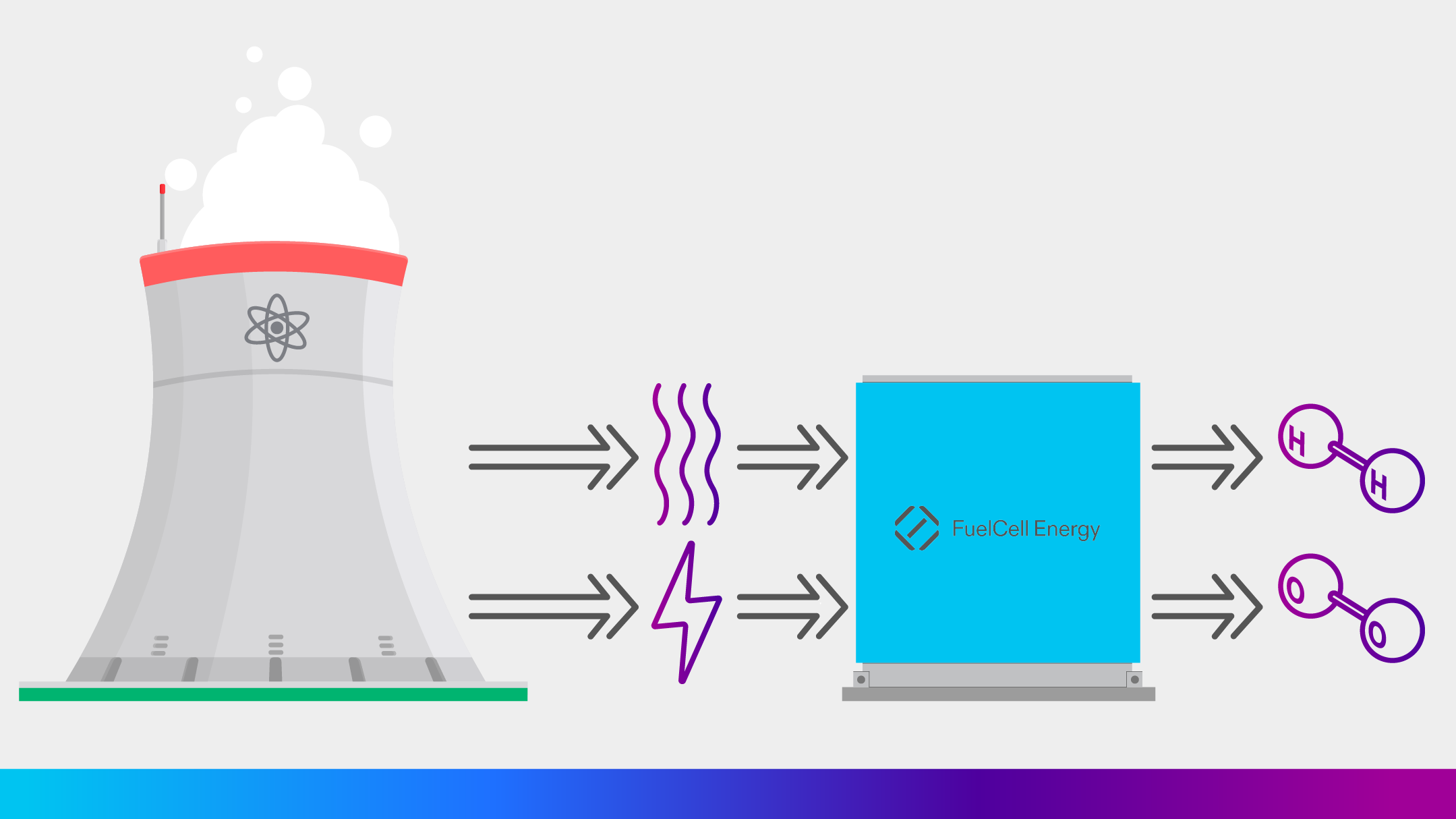 Hydrogen is expected to play a key role in decarbonizing transportation, chemical production, steel manufacturing, and power and heat production. An abundant supply of low or (ideally) zero-carbon hydrogen will be needed for the energy transition. Low-cost hydrogen, produced by electrolysis using zero-carbon nuclear power, has the potential to meet this emerging demand.

What is solid oxide electrolysis?

In solid oxide electrolysis, water in the form of steam is split into oxygen and hydrogen at the electrodes on the surface of a ceramic membrane. Oxygen removed from water molecules migrates as ions through the membrane, recombining as oxygen molecules on the other side. Hydrogen molecules leave the cell as pure hydrogen. The process is driven by electrical power, which provides electrons for the cell reactions and the driving force for oxygen ion migration between the electrodes. The process is shown schematically in the following figure:

There are other types of electrolysis cells, for example alkaline or polymer electrolyte membrane (PEM) cells. These cells operate at lower temperatures using other ions, but also split water into hydrogen and oxygen using electrical power. Since solid oxide cells operate at a higher temperature, they also operate at a higher electrical efficiency and do not require rare and expensive noble metal catalysts necessary for alkaline and PEM cells.

FuelCell Energy has demonstrated electrolysis system efficiencies of about 90 percent HHV, including system auxiliary loads and electrical power to support steam generation, meaning the energy input required is 44 kWh per kg verses the theoretical 39 kWh. If a source of thermal energy is available to offset some of the steam generation thermal load, efficiency can be increased to as high as 100 percent. 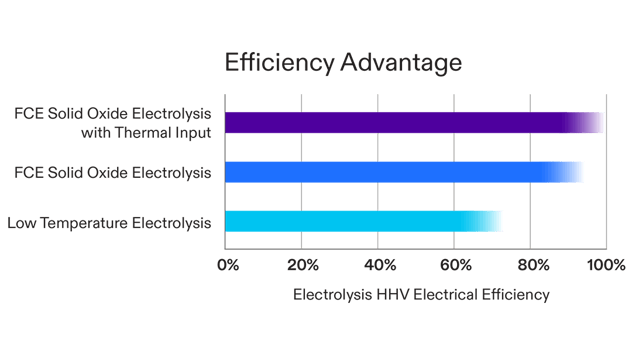 Electrolysis stacks are used in systems that include equipment for converting AC power to DC power for the stacks. Those systems also include mechanical equipment for pumping and vaporizing water, and for handling steam and hydrogen gas. These balance of plant auxiliaries consume energy, which is often not included in quoted efficiency values. But they are included in the efficiency comparison shown here, which represents total system efficiencies. The breakdown of energy consumption in FuelCell Energy’s electrolysis platform is illustrated in the following figure, which shows energy consumption for a stand-alone system without the benefit of thermal energy input. Depending on the application, compression of the hydrogen could add 2 to 4 kWh per kg to the energy requirement.

Electrolysis Energy Use and System Efficiency

FuelCell Energy has worked with Idaho National Laboratory and several nuclear utilities to evaluate the use of nuclear power for electrolysis1. INL is the nation’s leading center for nuclear energy research and development, and also performs research in each of the Department of Energy’s strategic goal areas: energy, national security, science, and the environment. The ability to use waste heat from the nuclear plant can provide significant efficiency benefits, as illustrated in this modification of the previous figure:

FuelCell Energy’s packaged 1.1 MW system is configured as two skids: one containing the stacks and mechanical equipment and the other containing electrical equipment. This system is designed to produce approximately 600 kg of hydrogen per day for distributed applications, such as manufacturing or vehicle fueling. Electrolysis systems using nuclear power will be much larger in scale, consisting of repeated stack modules and large scale electrical and utility equipment. The range of scales for various applications is illustrated below, showing systems that could integrate with the new generation of Small Modular Reactors (SMR’s) being introduced and very large-scale power plants.

Nuclear plants are not easily ramped up and down in response to demand fluctuations, but integration with an electrolysis system can provide this flexibility. The nuclear plant can divert power to the electrolysis system during periods of low demand while remaining at full output. Hydrogen produced during these periods can be converted back to power during high-demand periods using reversible solid oxide stacks in fuel cell mode or another hydrogen-fueled power generation system. Alternatively, the hydrogen can be sold for use in applications that require zero-carbon hydrogen.

Another application is to dedicate all or a portion of the nuclear plant output to hydrogen production on a baseload basis. This approach operates the electrolysis system at a high-capacity factor, reducing the capital cost portion of the hydrogen cost. Hydrogen produced from baseload nuclear power has the potential to be the lowest cost zero-carbon hydrogen available, especially if the electrolysis system operates at high efficiency and can benefit from the efficiency increase provided by waste heat from the nuclear plant.